This year marks the 50th anniversary of Doctor Who, the longest-running science fiction series in the world; the first episode was broadcast on 23 November 1963.

Royal Mail will celebrate the 50th anniversary of the world’s longest running science fiction series in TV history - Doctor Who - with the launch of a special set of 11 stamps.

The stamps will feature each of the actors who have played the role of the Time Lord over the last 50 years. The stamp design will see the face of each Doctor appearing out of the iconic swirling screen idents, made famous by the opening credits of the BBC TV show. The first two stamps are in black and white, as the first two incarnations of the Doctor were broadcast in monochrome.

Featuring on the stamps are the present Doctor, Matt Smith, as well as David Tennant, Christopher Eccleston, Paul McGann, Sylvester McCoy, Colin Baker, Peter Davison, Tom Baker, Jon Pertwee, Patrick Troughton and the First Doctor, William Hartnell.  In addition to the 11 stamps featuring the Doctors, a five stamp miniature sheet will also be available. In the centre of the sheet is a stamp featuring the Doctor’s
space and time travelling machine, the world famous Time and Relative Dimension in Space or the TARDIS as it is more commonly known. The remaining four stamps feature some of the Doctor’s most famous foes; a Dalek, a Cyberman, an Ood and a Weeping Angel.

Some facts about Doctor Who

• The series became essential early evening viewing across the nation, drawing audiences of up to 16 million.

• The rebooted series, from 2005, has seen audiences reach 10 million and has won five BAFTA awards.

• Doctor Who has sold to over 206 territories worldwide and is a top selling programme on the BBCWW drama portfolio.

• Matt Smith, the current Doctor Who, was the youngest actor appointed to play the role.

• Tom Baker, the oldest living Doctor, played the role for the longest – from 1974 to 1981 and has starred in the most episodes.

• Jon Pertwee, the Third Doctor, was the first to be filmed in colour.

Full list of the 30 stamps in this Doctor Who celebration: 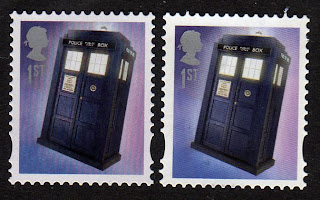 The difference is easy to spot without even resorting to a perforation gauge because the miniature sheet stamp has 11 holes above the elliptical one, and the pane stamp has 12.  The stamps in the Retail Booklet & Generic Smilers Sheet also have 11 holes.

On the Miniature sheet the Tardis stamp perfs are interrupted/bridged on the end of the 3rd tooth in from the corners, on each side, except that thebridge  is on the 2nd tooth from the bottom on each vertical side (8 in total). 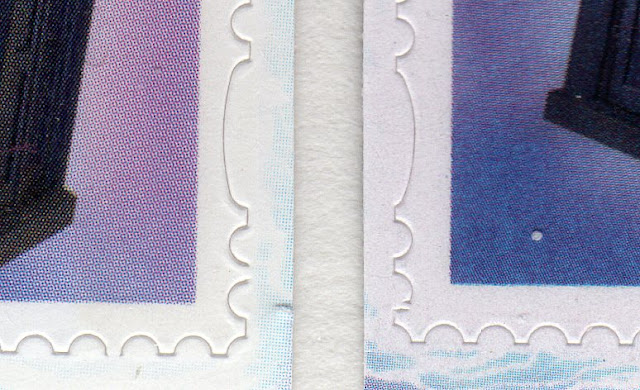 First Day Covers in 2 different designs, a largely black and white design for the first eight Doctors single stamps; and a multicoloured design for the most recent three doctors, for the miniature sheet and the PSB Machin pane on Royal Mail serviced FDCs.  Both covers will be available unserviced, although we don't know what supplies Post Office Branches will receive.

Details and prices will appear here later and on our shop.

Special Postmarks available on the day of this issue are shown here.

These postmarks cannot be obtained after the date of issue.  These images are not be to scale.