Morris and Company - stamps and prestige stamp book - 5 May 2011

Founded by the Pre-Raphaelite artist and designer William Morris in 1861 Morris, Marshall, Faulkner & Co. manufactured and sold decorative arts products. The firm’s medieval-inspired aesthetic and respect for hand-craftsmanship and traditional textile arts had a profound influence on the decoration of churches and houses into the early 20th century

Royal Mail is celebrating these events with a set of six Stamps and a premium-priced Prestige Stamp Book - yes, the price of the PSB is 10% over face value.

We don't have details of the PSB contents, aside from images of the stamp panes.  The total face value of the stamps contained in the book is £9.04, but the selling price is £9.99, the first time that a premium price has been charged for something that is essentially only purchased by collectors. We understand that the extra is to pay for the design and production of the booklet. Royal Mail will claim that there is a continuing demand for PSBs but that is mainly because of the unique stamps that some books contain as very few other people are aware of their existence.  The sound of a golden goose being shot in the foot comes to mind.

The stamps are designed by Together Design and are printed in lithography by Cartor Security Print. The size is 37 x 35mm.

Pane 1: expected to be self-adhesive, containing 5p x 4, 10p x2, and 50p x 2, which should all have some security features.  The colour shown for the 5p and 10p are so pale as to be unbelievable; the 50p shown is however darker than the sheet version (see actual stamp images below).   The 5p & 10p have previously been printed self-adhesive in sheets by De La Rue, so they will be new stamps to the specialist.   The 50p printed by Walsall appeared in the London Festival of Stamps PSB, with source code MPIL.  If the stamps in this pane have a security overlay, then the 50p will have a year code for 2011.  If the 5p & 10p have a security overlay, they will be totally different to the sheet ones which have security slits only.

The pane is printed in gravure litho by Cartor, only the 50p has the security overlay: 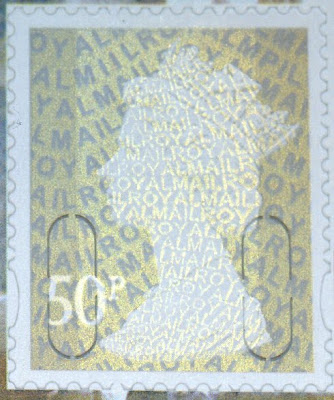 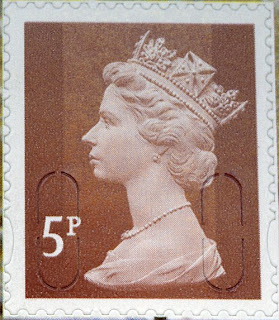 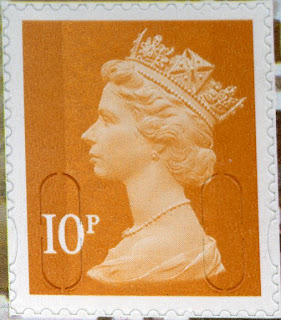 Pane 2: Block of 1st class and £1.10 stamps in two designs;
Pane 3: Block of 4 stamps, being 2 x 76p and the other two 1st & £1.10 not included in Pane 2;
Pane 4: Block of 4 x 2nd class stamps (previously issued for Christmas 2009, showing an Angel with a Lute from the Church of St James, Staveley, Kendal) separated by one or two labels. These stamps were also originally issued in self-adhesive form with a conventionally gummed stamp in the miniature sheet.  These are conventionally gummed, so a collectably new stamp which should receive separate catalogue status.

All images are Copyright Royal Mail 2011.

Special Postmarks
Postmarks available for the day of issue are shown here - these may not be to scale.   NOTE: These postmarks cannot be obtained after the date of issue.

If you wish to be told when this page is updated, please use the ChangeDetection panel alongside the stamps at the top of the page.