There are many claims for the first aerial post flight, but the first authorised United Kingdom Aerial Post took place on Saturday 9 September 1911, from Hendon to Windsor by Gustav Hamel.

With the prestige bookpanes now to hand we can show the new Machin definitive stamps with MPIL & M11L codes. Note that the 5p has no security overlay and none of the stamps has security slits, being on PVA gum. 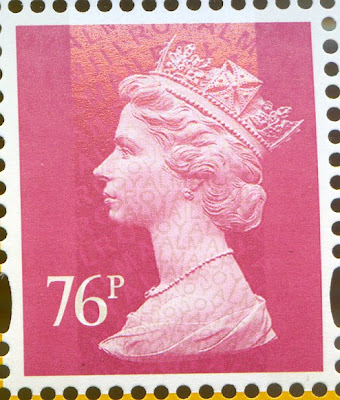 Technical details: The MS, containing 41 x 30mm stamps is designed by Robert Maude and Sarah Davies.  The 146 x 74mm sheet is printed in litho by Cartor Security Printing.  Perf 14.5 x 14, all over phosphor.

The Prestige Stamp Book is also designed by Robert Maude and Sarah Davies, and written by Peter Lister, President of the British Air Mail Society.
Preliminary information has a note against pane 4 "(intaglio)", but the printing process is described as "Lithography, except pane 1 which is gravure", and the printer is identified as Cartor Security Printing.  However, we know that Cartor do not have gravure capability, so pane 1 will probably be printed by Walsall, especially if self-adhesive.  So pane 4 will be intaglio, as was the 2005 Castles miniature sheet, which was printed by Enschede.  We await the final product with interest to see who printed which panes!   The latest information we have is:

The four panes are.  A three-stamp aerial post pane, featuring a £1.10p stamp flanked by two 1st Class stamps; a second three-stamp pane with a £1 stamp flanked by two 68p stamps; * a four-stamp pane of 50p Windsor Castle stamps, re-issued from the 2005 set of high-value definitives stamps, and printed intaglio.   The fourth pane of mixed Machins comprises of eight stamps printed by lithography: four 5p, two 1st class (top left and bottom right), two 76p (bottom left and top right), with the three-quarter portrait of George V by Downey in the middle. The main background image is a detail from a 1911 poster advertising the Coronation Aerial Post.  Another source says that the Machin pane will have ordinary gum.  We shall find out in about a month when we get the actual books!  Update: 1st class gold and 76p stamps have security overprint with MPIL M11L code.

* Although previously issued the Windsor Castle stamp should have full catalogue status because the earlier version was issued in a miniature sheet with 3 others.

Special Postmarks
Postmarks available for the day of issue are shown here, others may be added.  (May not be to scale, cannot be obtained after 9.9.11)

If you would like to be contacted when this page is updated please use the ChangeDetection panel alongside the stamp image.