The iconic and official imagery of Her Majesty the Queen is brought together in six new stamps to mark the 60th anniversary of the accession.

A Miniature Sheet brings together six portraits of the Queen taken from stamps, coinage and banknotes issued during her reign, including a brand new 1st Class diamond blue Definitive which will replace
the gold Definitive in Post Offices during Jubilee Year, and will also be available in counter sheets, stamp books and business sheets.  1st class Large versions will be issued in March or April when the new tariff stamps are issued.

The Diamond Jubilee ‘Machin’ features Arnold Machin’s iconic image on a blue background that highlights the words ‘Diamond Jubilee’ in iridescent ink. Since it first appeared in 1967 this timeless image has been reproduced on more than 220 billion British Definitive stamps. As well as the Machin image, the sheet also features a special Diamond Jubilee edition of the first stamp of Her Majesty’s reign, featuring the iconic photograph by Dorothy Wildling, first used in 1952.

The Diamond Jubilee Miniature Sheet also creates another philatelic first: bringing together the most iconic portraits of the Queen as she appears on coins and banknotes, as well as stamps. Since the Penny black, Royal Mail Definitive stamps have featured an image of the monarch facing to our left. Royal Mint has a different convention as succeeding monarch’s alternate the direction in which they face. Her Majesty the Queen faces to our right on coins. This is why the two Definitive stamps featuring the coin imagery will be the only Definitive stamps where the monarch faces this direction. It's probably also the only occasion when two different Machin portraits have appeared in the same miniature sheet.


Background on the stamps in the miniature sheet

Harry Eccleston Banknote Portrait
A new series of notes, designed by Harry Eccleston, began to appear in 1971. His portrait of the Queen on the £5 note showed her wearing the robes of the Order of the Garter, as on the subsequent £1 in 1978.

Mary Gillick Coinage Portrait
Coins with Mary Gillick’s design were first issued in 1953. This image is still used on Maundy Money to this day.

Arnold Machin Coinage Portrait
First issued in 1968, Machin’s design was created for the new decimal currency, and subsequently provided the basis for the stamp image. The Machin coin image is printed next to the Machin stamp image
in the sheet.

The counter sheet stamps are printed in gravure by De La Rue in sheets of 50.  Initial supplies of the Business Sheet were printed by De La Rue but Walsall have also printed both the standard and Large Letter stamps in this form.  Booklets are printed by Walsall Security Print.  There are several ways of distinguishing printings but the easiest is by the FSC certificate code as reported in our blog.

From 6 February 2012 this new Diamond Jubilee Definitive 12 x 1st Class book will be available and remain so throughout the Queen’s jubilee year thereby replacing the gold Definitive. There are rumours that flame or PO red stamp will replace the Jubilee stamps.

As we originally wrote here: On 27 March the 4 x 1st Large book, 1st Large Counter sheet and the 50 x 1st Large Business sheets will be issued.  At the same time the colour of the 50p stamp will change from pale grey to rust.  The change to rust has been postponed until at least 2013.  No explanation has been given either for the new colour nor the postponement.

The date of 27 March was always intended by Royal Mail to be the date when the Machin and Country definitives for new postage rates were issued.  But delays in approving the increase meant the postponement of the official issue date of the Tariff Change stamps (FDC & Presentation Packs) to 25 April.  However, a breakdown in communication between Royal Mail and Post Office Ltd resulted in some PO branches selling the Large Letter counter sheet stamp as early as 8 March.  The Walsall-printed Business Sheet was available from 16 March,  By 22nd March the booklet had appeared. 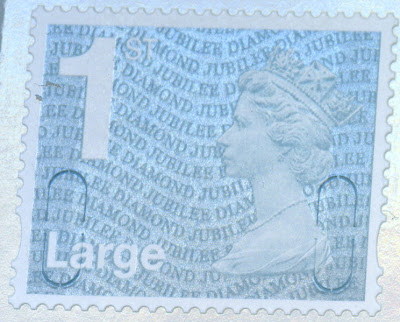 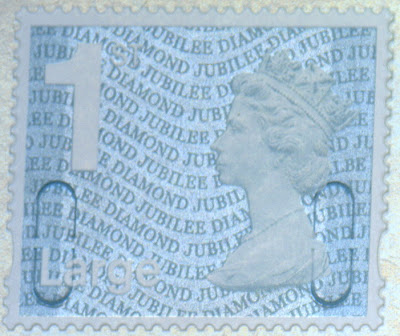 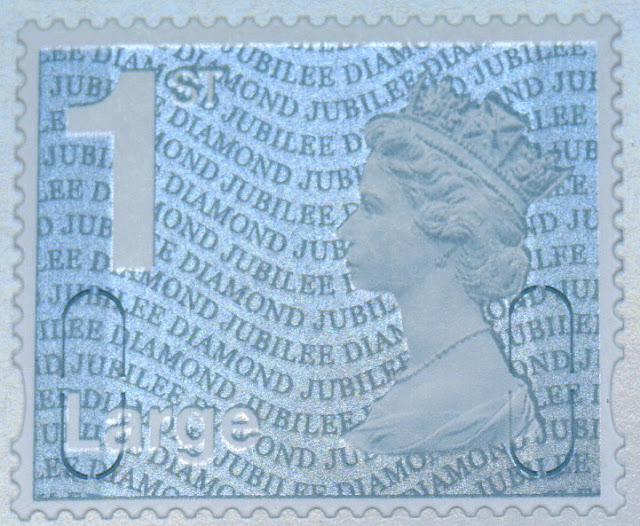 From left to right: counter sheet (code LEE), business sheet (code LBE), and booklet (code LFE) behind head of The Queen.  Images copyright Norvic Philatelics. Note that when these were added to the page Royal Mail had not supplied our stock of these stamps: these pictures came from people who have bought the stamps at Post Offices.

Adding to the confusion, at about the same time that Royal Mail Edinburgh told us that the early release of the stamps was unofficial and unauthorised, Post Office Ltd confirmed that they would be sold from all branches on 27 March.  The next day branches were instructed not to sell the stamps, and if they didn't have any gold ones, to make the rate up another way - even if the customer wanted a Business Sheet of 50!

As Post Office Ltd authorised the sale of these in their branches on 27 March 2012 that seems to be the most appropriate date for a first day cover.  Anything before that is a pre-release.  Any covers dated 25 April are official or simply somebody bowing to Royal Mail's warped view of how stamps can be 'officially' issued again a month after their first 'official' issue!  (We don't have any of these for sale.)

Note that the Large Letter stamp is in it's numerically future position of 90p, rather than before the 87p at its selling price on the day of 75p.

Products available - we are supplying the miniature sheet, the stamps from that and the stamps from other sources.  Also (after 6 Feb) first day covers of the Jubilee Machin definitive.

Special Postmarks available on the day of this issue are be shown here.  These postmarks cannot be obtained after the date of issue.  These images are not be to scale.

Additional images for 25 April are shown on the tariff change page for anybody who wants to create FDCs - I suggest only the Tariff change stamps as the Large Jubilee was clearly issued a month earlier.

If you wish to be told when this page is updated, please use the ChangeDetection panel alongside the stamps.
If you have any questions about these stamps or wish to purchase any, please email us.