The London 2012 Paralympic Games commences on 29 August and concludes on 9 September,

Royal Mail have provided some preliminary details of the Paralympic Gold Medal stamps.

The design of the stamps, miniature sheet and FDC have now been made available; however some of the details in the press release (below) have changed: 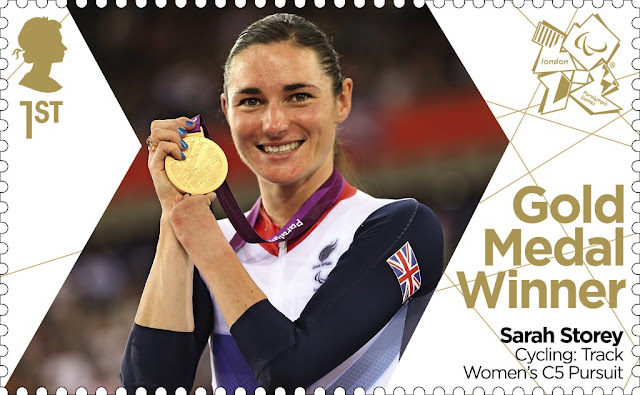 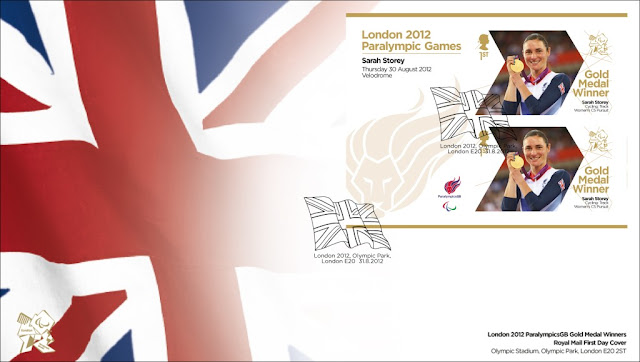 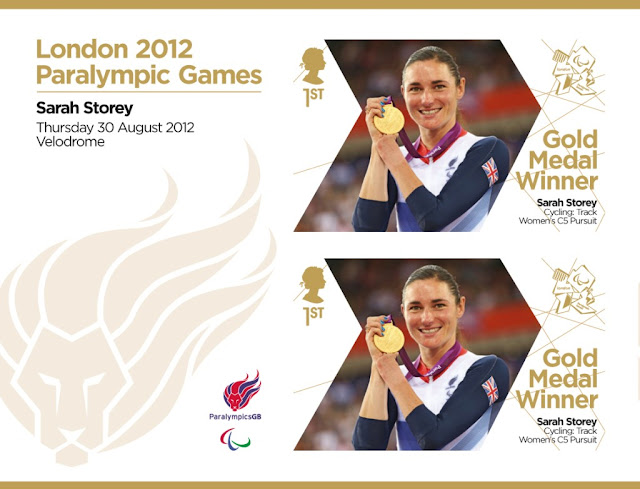 "Each miniature sheet will comprise of two identical 1st Class stamps featuring the UK Gold Paralympic Medal winning athlete or team. The stamps will use the same design format that was created for the Olympic Gold Medal Winner stamps issued after the Team GB medal winning events during the London Olympic Games, only with the Paralympics logo substituted for the Olympics logo. Each stamp will bear the athlete/team’s name and the name of the event."

The medal winner’s image will be dropped into the format and the artwork sent to the printers with the objective of having the Gold Medal Winners Miniature sheets on sale at the 518 Post Offices that received the overnight distribution of the Olympic Gold Medal Winners stamps as soon as possible with a wider distribution to a network of 4700 offices later.  There will be four issue dates – 1st September, 4th September, 7th September and 11th September The first stamps were printed overnight and issued on 31 August, and as soon as possible afterwards  It is unclear whether this pattern will be repeated for all medals.  The 4700 second round post offices have been told to expect deliveries on 6th and 13th September.   For full details of the stamps and issue dates updated daily, please see our blog.


A4 Sheet – Printer Varieties
A4 sheets from each of the 6 regional printers will be available to order from Tallents House. Each A4 sheet will feature 8 minisheets; 2 each of 4 Gold Medal Winners. Price £9.60."
Each A4 sheet WILL feature 8 mini-sheets but the first contains only the first stamp (as shown above) and the composition of later ones will depend on how many medals are won.  Some sheets may have a mix of stamps. Stamps may not be issued in the same order that medals are won, if appropriate images and permissions to use them are not received in time.


For full details of the sheets and issue dates updated daily, please see our blog. 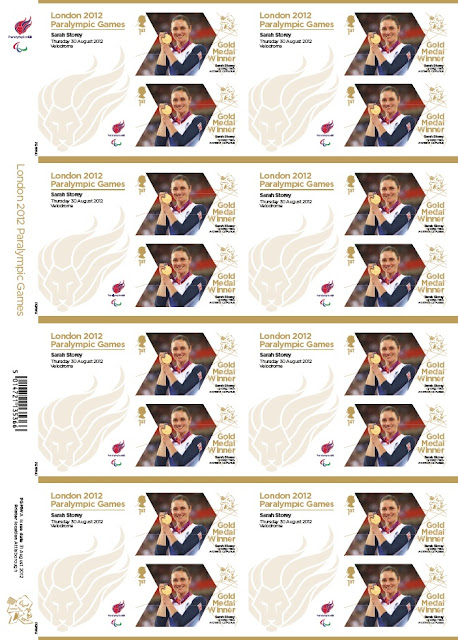 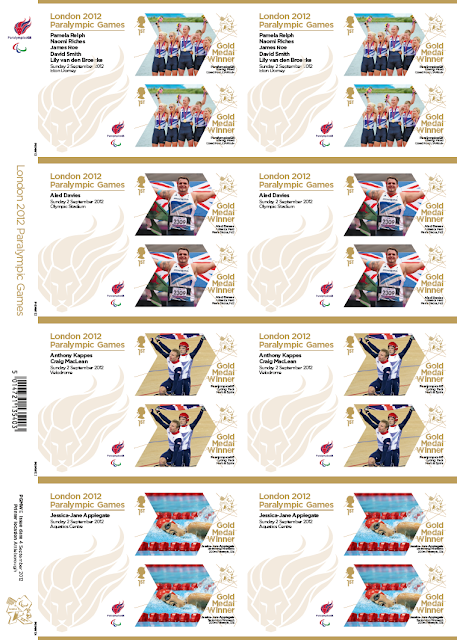 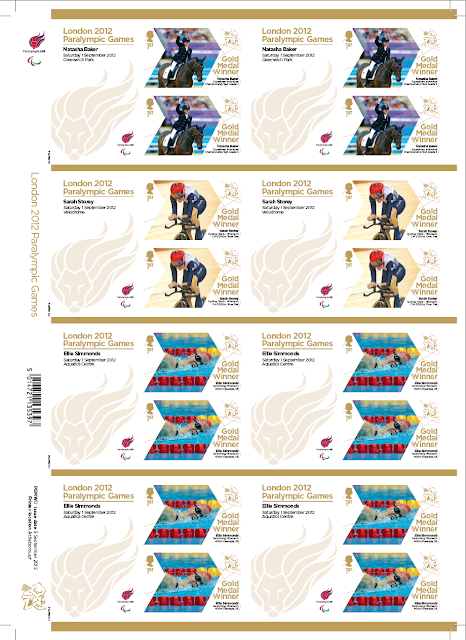 The self-adhesive miniature sheet is designed by True North and Royal Mail.  The template (base sheets) were printed in lithography by the Walsall Security Print subsidiary Cartor of France, but the overprinting was applied overnight by 6 regional printers, at Preston, Edinburgh, Solihull, Swindon, Attleborough, and London.   The litho overprint has the winner's image and winner and event details, and the ParalympicsGB logo.  The phosphor is placed on the stamp avoiding the image area and the lower-right corner where the winners' details are overprinted in litho.

Miniature Sheet         Individual stamps    A4 sheet of 8 miniature sheets  - these are produced by 6 different (over-)printers.

First Day Covers - Unless handed in over the PO counter, covers for postmarking should be sent to your nearest Special Handstamp Centre Royal Mail Tallents House, 21 South Gyle Crescent, Edinburgh EH12 9PB. We understand that they will be accepted until 10 October.

First day postmarks will be the same as for the Olympic Games Winners stamps, using these references:

We understand that these Flag postmarks will be applied ONLY to gold medal winner stamps.


If you have any questions about these stamps please email us.


NB: we will endeavour to answer all emails within 1-2 days. If you do not receive an acknowledgement please email us from a different address (eg hotmail, gmail).